A new Safari Zone has been announced! Trainers in and around New Taipei City, grab your bug catching gear and get ready for a buzz worthy event!

From the Official Announcement

Despite being one of the world’s most densely populated metropolises, New Taipei City has always strived to maintain the city’s biodiversity and natural scenery by transforming forgotten areas into beautiful new parks. The New Taipei Metropolitan Park is the largest city park in the Greater Taipei area and is famous for its waterside walkway and wildlife.

Trainers will be able to find Scyther, Combee, and many Water-, Bug- and Grass-type Pokémon from 10:00 a.m. to 5:00 p.m. in the park, as well as more than 60 tourist attractions across New Taipei City. From the historical old streets to scenic mountain areas, it’s your chance to make the most of this exciting city while catching Pokémon to your heart’s content!

While only Scyther and Combee have been officially announced as Increased Spawns, there are sure to be many more Water-, Bug-, and Grass-type spawns available in New Taipei City. Should any more Pokémon get confirmed we will update the table below.

New Taipei City is a special municipality and the most populous city in Taiwan. Located in northern Taiwan, the city includes a substantial stretch of the island’s northern coastline and surrounds the Taipei Basin, making it the second largest special municipality by area, behind Kaohsiung. New Taipei City is bordered by Keelung to the northeast, Yilan County to the southeast, and Taoyuan to the southwest. It completely surrounds Taipei. Banqiao District is its municipal seat and biggest commercial area. Until 2010, the area that roughly corresponds to the present New Taipei City was known as Taipei County.

The climate of the city is characterized as a humid subtropical climate with seasonal monsoons with ample rainfall evenly distributed throughout the year. Seasonal variations of temperatures are noticeable although temperatures typically varies from warm to hot throughout the year, except when cold fronts strikes during the winter months when temperatures can sometimes dip below 10 °C (50 °F). January is typically the coolest month and July is usually the warmest. 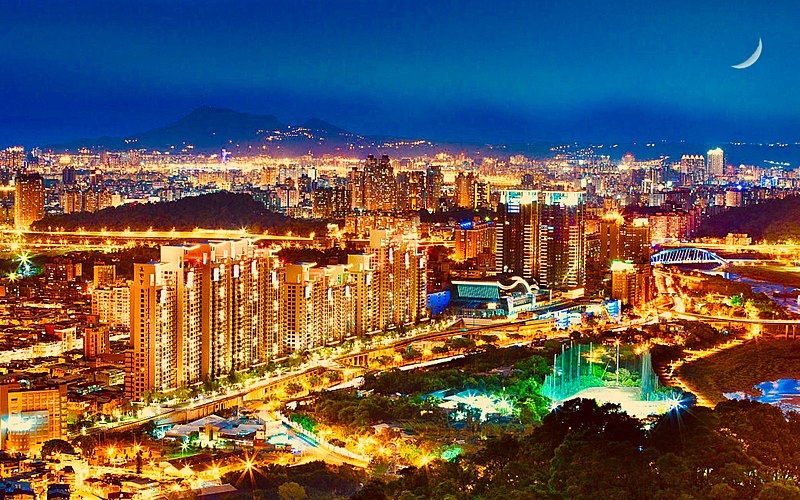